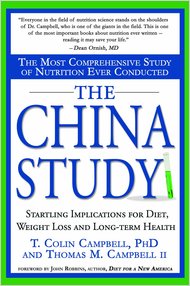 medication. They provide powerful scientific evidence. They also point out that the medical community in many instances is too quick to prescribe pills or surgery.

Dr. Campbell is author of “The China Study,” which is considered one of the most comprehensive studies on health and nutrition ever conducted. Campbell says that unlike the statin prescription drugs and invasive surgeries American doctors routinely prescribe, a diet consisting primarily of whole plant-based foods treats the underlying causes of these conditions as well as the symptoms. Patients experience immediate drops in cholesterol levels, blood pressure and excess body weight. Their energy levels increase. They lose aches and pains, contract fewer illnesses and enjoy a host of other improved health benefits.

Dr. Campbell and his son, Nelson, are kicking off a series of rallies across the country. The first will be in Louisville, Kentucky, on July 12, 2014, and will provide a sneak peak of a new documentary called PlantPure Nation. The event is free but you need to register for a ticket at this link.

The documentary film PlantPure Nation tells the story of three people on a quest to spread the message of one of the most important health breakthroughs of all time. When Dr. Campbell inspires Kentucky State Representative Tom Riner to propose a pilot program documenting the health benefits of a plant-based diet, powerful industry lobbyists oppose it. Dr. Campbell’s son decides to try his own grassroots approach in his hometown of Mebane, North Carolina. Will people who were raised on Southern comfort foods such as meat, potatoes, biscuits and gravy consider a plant-based diet?

The film explores issues of the small family farmer, food deserts, modern medicine and plant-based nutrition. The way we eat affects our health, how 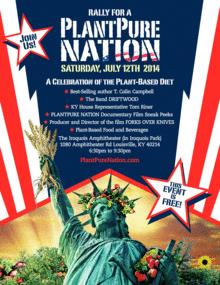 we produce and distribute food, the vitality of our general economy, the stability of our government and the state of our environment.The creative team behind PlantPure Nation includes the writer and producer of the hit documentary Forks Over Knives.

Be on the lookout for a PlantPure Nation Rally near you, or visit their website to request that they visit your community.

Here is link to New York Times article about The China Study and an interview with Dr. Campbell.