A health scare got Jeff Davis’s attention. At 240 pounds, he’d seen his weight move the needle on the scales every year. The weight gain – and the effect it had on his body – resulted in a number of medications being prescribed by doctors. He was already on blood pressure and cholesterol medication and a blood thinner when he learned he was a pre-diabetic. Yet another medicine was prescribed. He also snored to the point where his wife kicked him out of bed every night so she could get some sleep. His doctor recommended a sleep clinic for sleep apnea. 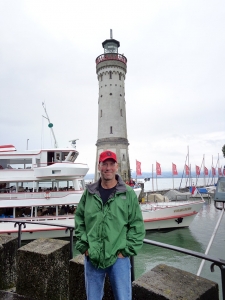 Not once did Jeff’s doctor at the time (he has since changed doctors) recommend that he be more mindful of the food he ate. Instead, the answer seemed to be more medicine and medical treatments.

The diabetes scare finally got Jeff’s attention and he decided it was time to pay attention to what he was eating.

“I wanted to improve my health,” he said. “I was worried about being a diabetic and I recognized I needed to change my eating habits.”

He joined a weight loss program that encouraged eating all the fruits and vegetables he wanted but cutting back on other foods. He began tracking what he ate and was surprised he added lots of calories from large portion sizes and from snacking calorie-laden foods. He acknowledged he couldn’t pass a snack by and enjoyed consuming sweets whenever anyone at his office brought them in.

When he changed his snacks to fruits and vegetables, started tracking meals and cut back on portion sizes, his weight began to drop.

“The hardest thing about losing weight was not eating foods I was used to eating,” he explained. “I had to discipline myself to be mindful about not overeating and not snacking.” Another helpful strategy was treating himself each week to one meal where he could eat anything he wanted. “That helped me stick with a plan,” he said.

Now, 60 pounds lighter, Jeff has experienced many benefits as a result of his weight loss.

“I feel better,” he says. “I feel better physically and also mentally, knowing that I lost that weight and it has improved my health.” He cites the fact that he is now off all medications except for blood pressure, and his doctor believes that it may be possible to take him off that. Jeff is monitoring his blood pressure over a period of time so his doctor can reassess whether the prescription is necessary. “And I no longer snore!” he reports.

Jeff acknowledges that he has always been physically active and exercises several times per week. The key ingredient, though, to improving his health was watching what he ate.

When it comes to our health, medicines may be helpful but they often have side effects.

Side effects of cholesterol medicine include liver disease and kidney failure; a side effect of blood thinners include uncontrollable gastrointestinal bleeding and fatal hemorrhaging; side effects of diabetes medication include heart failure, unusual tiredness, weight gain and fluid retention in legs. Why risk these dangerous side effects if you can eat foods that promote health, such as plant-based foods?

“When you learn about various medicines,” says Jeff, “it begs the question: are they helpful or harmful? Why take the risk when your food can be your medicine?”

There is also an economic factor. The medications were costing Jeff several hundred dollars per year.